We Are Many, A film about this historic day.

Friday 11 March 2016 I went to see the film We Are Many at a showing in the old village hall in Forest Row in West Sussex. This film is about an extraordinary and unique day in world history, 15 February 2003. It was the day when tens of millions of people marched in 780 cities around the world in protest against the proposed war by Britain and America, and a few others, against Iraq.

Marching with millions The film brought back memories of the experience of that demonstration in London as a day of enormous pleasure. Marching in a crowd of hundreds of thousands, (it turned out to be between one and two million) united in a common feeling of opposition to war and with an expectation that such a huge expression of public opinion could not be ignored gave the whole of that incredible and unprecedentedly large gathering a huge sense of human solidarity, well-being and optimism. 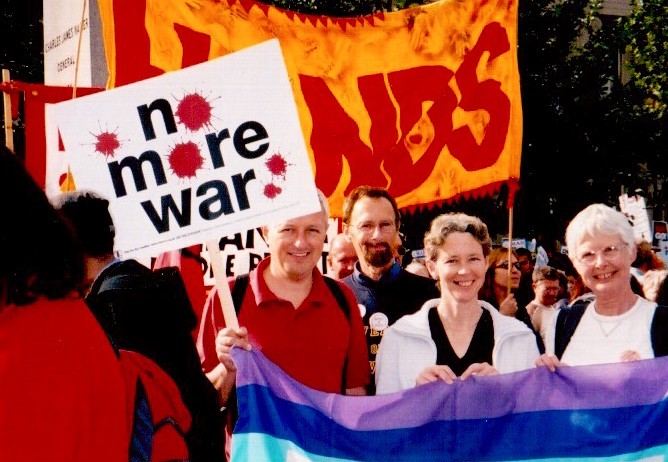 I’m the guy with the beard

That biggest of all demonstrations

I knew, even on the day of the demonstration, that there were demonstrations taking place around the world. Our contingent of demonstrators travelled up to London from the little town of Burgess Hill in a coach, early that morning, and I remember taking the microphone on the bus and telling people the news of the demonstrations that were taking place around the world, but I had no idea that the scale was so vast. The film claimed there were demonstrations in 780 cities, including 145 in America. We saw footage of many of them and these were all on a vast scale except in Egypt where only a few dozen people dared to take to the streets.

Of course, we can understand that tens of millions of people around the world, having looked at the evidence would be distressed by the conclusions that politicians were drawing but how could such a gigantic world wide event be organised? The film had footage of a meeting, attended by thousands of people in a disused railway station in Florence, on the occasion of The World Social Forum of 2002, when the demonstration was proposed for 15 February 2003.

Against morality and international law

Everyone now knows that popular opinion, common sense, international law, human decency, morality, rational argument were all ignored by those who had the power to prevent the war.

So the film also reminded me of my feelings of outrage against the ridiculous arguments that were put forward in favour of the war against Iraq. For example, did any sane person in Britain really believe that Saddam Hussein in Iraq was planning to attack British soil and had prepared to be able to do so within 45 minutes? (We, the French and others had comprehensively bombed his air force into extinction in the preceding years - acting totally illegally, of course.) Did anyone believe that he had weapons of mass destruction when the UN weapons inspectors had been there for years without finding them, or that removing the inspectors and bombing the country was a more effective route to finding these weapons?

Apparently in America over half the population became convinced that Saddam Hussein was responsible for the attack on the Twin Towers in New York, this being an idea fostered by the American government and was always a barefaced lie.

The low point of British democracy

18 March 2003 the British Parliament voted to support a war against Iraq. This event was , in my estimation, the lowest point in my lifetime in British and American democracy when so many politicians pretended to be convinced by the evidence put before them and voted for a massive bombing attack on a people that did us no harm and never once threatened us. There could hardly be a clearer case of an illegal war and there could hardly be a clearer case that leading politicians like Bush, Blair, Rumsfeld, Cheney, and Jack Straw are war criminals who should be brought to trial in The Hague and incarcerated for a long time. Not only them but also all those weak, and immoral politicians who voted for the war. Personally I have never been so disgusted with our much-praised British democracy.

There was footage of many of the speeches at the demonstrations and lots of interviews with organisers of demonstrations particularly British and American ones.

There were comments from Hans Blix, Jeremy Corbyn, John le Carré, Richard Branson, Mike Leigh and many others.

Tony Blair appears in this film. He is seen making his lying statement in Parliament about the imminent threat and the active factories across Iraq producing these weapons of mass destruction. He also appears in a brief clip from the Chilcott enquiry, the report of which, all these years after the event has still not been presented to the British public. It shakes one’s faith in politicians and the political system in this country.

George Bush is seen making his smirking speeches and playing a game of “lets-find-those-weapons” in the White House.

The film showed a number of expert witnesses testifying to the illegality of the war including the British international lawyer, Philippe Sands and a rather hesitant, reluctant-to-answer, Kofi Annan, then secretary General of the United Nations.

The guy who was, I think, a general, and second to Colin Powell, said that the support he gave at the presentation to the UN Security Council by Colin Powell was the low point of his personal and professional career. He regarded George Bush, Dick Cheney, Donald Rumsfeld and others as war criminals who ought to be brought to trial in The Hague and he would gladly testify against them even if he was included in the trial found guilty himself. It was clear that he felt a deep sense of shame over the whole affair.

See this film if you can find it

All in all, I consider the film very important record of the extraordinary and unprecedented historical day when the people on the street were right and the politicians were wrong. It is hard to get to see it. Google the title. If you are lucky there may be a showing in your area. My thanks to Forest Row Film Society.

Archbishop of Canterbury talks about war (2007)