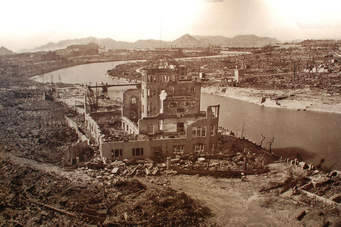 Since 1946 Hiroshima has been commemorating the nuclear destruction of the city. Today (August 2015) the commemoration ceremony is carried out before 40,000 people in Hiroshima and before the tv cameras of the world. Around the world memorial services are held. How did Japan respond one year after the bombing?  How is the world remembering Hiroshima today?

The American B-29, Enola Gay, dropped a small nuclear bomb on Hiroshima at 8:16 AM local time on the 6 August 1945. 60 to 80,000 people were killed immediately and approximately 135,000 died in subsequent years. Fires raged for three days. A year later, the Mayor of Hiroshima, at a memorial gathering in Hiroshima made a statement which included the following words:

“This horrible weapon brought about a ‘Revolution of Thought,’ which has convinced us of the necessity and the value of lasting peace. That is to say, because of the atomic bomb, the people of the world have become more aware that a global war in which atomic energy would be used would lead to the end of our civilization and extinction of mankind. This revolution in thinking ought to be the basis for an absolute peace, and give rise to a new life and a new world.

"What we have to do at this moment is to strive with all our might towards peace, becoming forerunners of a new civilization. Let us join together to sweep from this earth the horror of war, and to build a true peace. Let us join in renouncing war eternally, and build a plan for world peace on this earth. Under this tower of peace, we hereby make a declaration of peace.”

On every sixth of August since then the Mayor of Hiroshima has addressed the people of Hiroshima and the world. In 2001, the Mayor of Hiroshima, Tadatoshi Akiba, made a speech in which he emphasised the importance of reconciliation and the need to reject violence. He said that humanity “means valuing reconciliation in creating the human family’s common future. It means rejecting violence and reaching peaceful agreements through the power of reason and conscience.” More of this statement can be read in Remembrance Poems and Readings, published by Saxon books 2015.

On this 70th anniversary of the bombing of Hiroshima the Mayor of Hiroshima standing before a vast audience and the cameras of the world made another peace declaration. Around Britain and the world there were countless Hiroshima memorial ceremonies to remember the destruction and to call for the abolition of nuclear weapons.